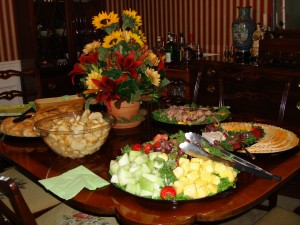 Whatever you choose, make it satisfying.

I had a discussion this morning with one of the many people preparing for the upcoming day of indulgence. That day is, of course, Thanksgiving, day of sanctioned gluttony, over fullness, and lots and lots of regret.

In planning the meal, which she cooks herself, an internal voice kept popping up to ask “Is that decadent enough?”

I thought that was such an interesting question.  It implies that the goal is to create a really, really decadent meal.  She went on to explain that her holiday pattern is to make the most gooey, buttery, rich, creamy, heavy meal possible, then finding herself feeling overstuffed, uncomfortable, and unhealthy.  She is not at all unusual.  Sound familiar to you?

She then went on to explain that she would like to prepare a healthier meal.  My reaction was not to follow that lead and start talking about how lean turkey without gravy, steamed green beans, and a salad would be just the ticket (oh, and forget the pumpkin pie, by the way).  No, my thoughts were stuck on that very interesting question, “Is that decadent enough,” that kept getting in the way of her planning a “healthier” meal.

This sounded like just another version of the dieting mentality, that all-or-nothing attitude about eating that causes people to swing from starve to binge over time with the predictability of a pendulum on a clock.

The response I got:

Of course she can have this kind of dinner.  It is a small gathering including just her parents and herself.  But that voice “Is that decadent enough?” kept interrupting logical thought.

“I guess I feel that Thanksgiving just includes those things, because that’s the day to do it.”

Aha!  The last supper mentality of the holidays is so ingrained in us.  Today is THE day to pig out.  Tomorrow is back to the diet trenches.  Miss your chance, and you have to wait until next year, or at least until December.  Of course we know that we could eat pumpkin pie and marshmallow topped sweet potatoes on the Friday after Thanksgiving, or any other day for that matter, but Thanksgiving is the sanctioned day of decadence – whether or not it is satisfying!  Think about how little sense that makes.  If that way of eating is satisfying, by all means go for it, but satisfying has other meanings.

Let’s take a look at the definitions of these two words, decadent and satisfying, for a little more insight.

Asking “Is this decadent enough?” sounds to me like using a Get Out of Jail Free card to break the rules as much as possible during your one day of freedom.  Whether you feel awful, or even whether or not it is truly what you want, is irrelevant to this discussion.  Just make the most of it!!

A much more effective way to get what you really want to is to ask “Is this meal satisfying enough?”  Don’t your think?  Your answer can never be wrong, because it is yours alone, and it reflects your desire to feel pleased, healthy, contented, and in charge of your choices.  There is no need to explain or apologize for that.